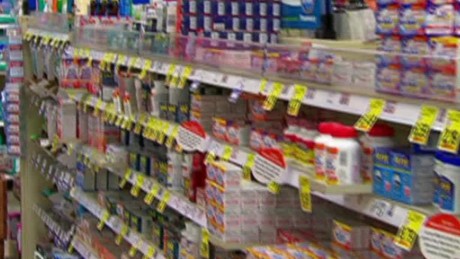 CNN)Taking one of the most-prescribed medications in the world — proton pump inhibitors — might dramatically increase a person’s risk for kidney failure and kidney disease, new research suggests. The study was released Thursday in the Journal of the American Society of Nephrology.

Doctors prescribe proton pump inhibitors, also known as PPIs, to help people who suffer from regular heart burn, ulcers, gastroesophageal reflux disease or acid reflux. They are sold under the names Prevacid, Prilosec, Nexium, Protonix, Aciphex and others. About 15 million Americans have prescriptions for them, although people can get them without a prescription — so the number who use them is likely much higher.
The ultimate Father&#39;s Day gift: A kidney
The ultimate Father’s Day gift: A kidney
The medications are popular because they relieve symptoms pretty quickly. It was also thought that they had a low toxicity.
Looking at data from the U.S. Department of Veterans Affairs, the study’s authors found 173,321 people who used PPIs and 20,270 took a PPI alternative known as histamine H2 receptor blockers. The authors, who work at Washington University in St. Louis and at the Clinical Epidemiology Center at the VA St. Louis Health Care System, analyzed data from these patients five years later.
They found that a large percentage of those patients who were taking PPIs were now having more kidney problems than those patients who took the alternative histamine H2 receptor blockers.
Join the conversation
See the latest news and share your comments with CNN Health on Facebook and Twitter.

Patients who took PPIs had a 96% increased risk of developing kidney failure and a 28% increased risk of chronic kidney disease compared to the patients who took the histamine H2 receptor blockers.
Earlier studies have shown that taking PPIs have been linked to acute interstitial nephritis, also a problem that may be likely to end in kidney failure. A study that ran online in JAMA in January also found a link between PPIs and a higher risk of chronic kidney disease, also known as CKD.
Like this study, it also was observational and doesn’t provide evidence of causality, but as the earlier study said, “even a casual relationship between PPI use and CKD could have a considerable public health effect given the widespread extent of use.”
Other side effects from taking PPIs include an increased risk of pneumonia, double the risk of infection from C. difficile and a small risk of osteoporosis, earlier studies have shown.
The authors of this research suggest that PPIs are overprescribed. Previous research, including a 2008 study and others have shown the same. The authors of the new study conclude if a person has a prescription for a PPI, it should be used sparingly and only taken for a short period of time