Home THE UNIVERSE Video: These fungal spores ‘talk’ to each other to find partners | Science | AAAS 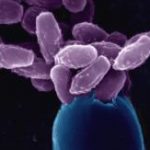 Reproductive cells cooperate with genetically similar types, but ignore others

It turns out that even asexual fungal cells can be social: As they grow and fuse with one another to form colonies, they reach out toward some neighbors while snubbing others. Now, researchers working with one of these microbes—an orange, filamentous fungus known commonly as red bread mold—have discovered the genetic basis behind how their spores, or asexual reproductive units, communicate. That chatter happens when proteins on the spores’ fusing edges start forming and dissolving in sync with those of other individuals, across a gap as wide as 15 microns (as seen in the video, above). Working under a microscope, the scientists watched interactions between pairs of these spores from 110 genetically different wild strains of the fungus. Would unrelated spores still fuse together? They put the spores into three “communication groups,” batches of strains whose spores interacted and grew toward one another while seemingly ignoring others. Researchers then analyzed their genes and further divided the groups until they had five in total, each one differentiated by a set of three genes. To see what role the genes play in spore-to-spore communication, the researchers replaced the genes of one strain with those of a different group. They then analyzed the behavior of the mutant fungus. The altered strain acted like a member of the new group, suggesting the genes dictate group membership, the researchers report online today in PLOS Biology. This is one of the first times that scientists have found simple, genetically similar organisms that communicate across long distances—yeast and slime mold, in contrast, require direct contact. The next step, the scientists say, is to figure out what molecular language the spores use to chat across that gap.

Source: Video: These fungal spores ‘talk’ to each other to find partners | Science | AAAS