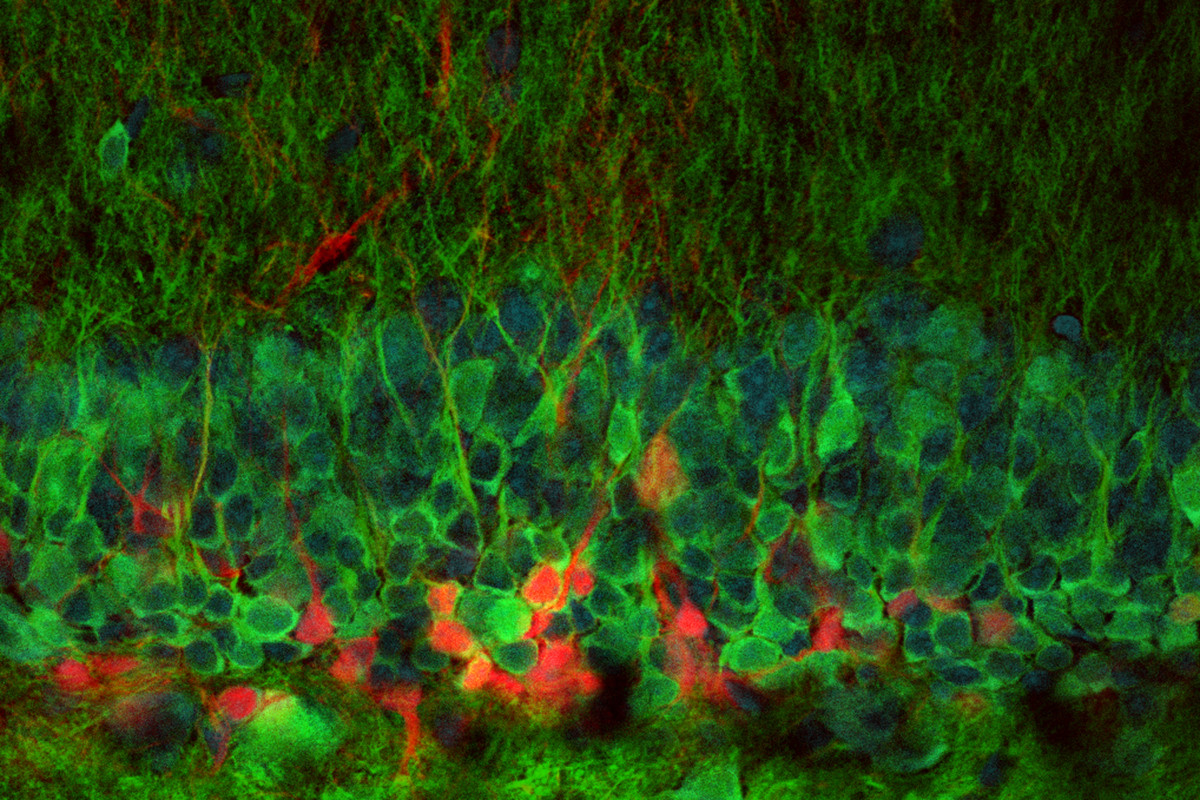 There they are! Newborn neurons vital for memory have been viewed in a live brain for the first time.

The work shows that new neurons in the adult brain are vital for learning the difference between similar memories, in mice at least. The discovery could aid treatments for depression, anxiety and stress disorders.

For a long time, it was thought that we are born with all the brain cells we’ll ever have. Now we know that certain regions of the brain continue to make new neurons throughout life. Slices of brain tissue show that most of these are created in the hippocampus – a seahorse-shaped structure known to be crucial for learning and memory.

Yet, until now, we had never seen these neurons in action in a live animal. Attila Losonczy at Columbia University Medical Center in New York and his colleagues combined several techniques to achieve the feat. They first implanted a device that included a miniature microscope into the brains of live mice. They also modified the mice so that newly made neurons would glow.

“This is impressive because it requires pulling off several delicate manoeuvres simultaneously,” says Michael Drew, a neuroscientist at the University of Texas at Austin, who was not involved in the study. “Putting these techniques together is not easy, which explains why no one has imaged adult-born neurons in live animals until now.”

The team were able to watch the activity of the cells while performing experiments on the mice to explore their function. In one, the mice ran on a treadmill while the team tweaked the surrounding sights, smells and sounds. For instance, the mice might hear low tones, smell a banana scent and see a blue light. Other times they would smell a lemon scent and see a blinking light. The team paired a small electric shock with some of the cues, so that the mice learned to associate these cues with an unpleasant experience.

The researchers then deactivated the new neurons using optogenetics, which switches off specific cells using light. Once they had done this, the mice were unable to tell the difference between the scary and safe cues, and ended up being fearful of them all. “They couldn’t tell apart these similar, but different, contexts,” says Losonczy.

“The finding suggests that newborn cells do something important and special in memory processing, that allows animals to tell apart and separate memories,” says Losonczy.

The inability to discriminate between two similar but distinct events – such as a gunshot versus a car backfiring – is often seen in panic and anxiety disorders, says co-author René Hen, also at Columbia University. This suggests new neurons, or lack of them, plays a role in such conditions.

The results might also have implications for other disorders. For example, the birth of new neurons seems to beimpaired in depression and schizophrenia. Since most antidepressants stimulate the production of new hippocampus neurons, these experiments may be very relevant to the treatment of depression, says Drew. “This paper gives us some tantalising observations and sets the stage for many more experiments.”