Home AGRICULTURE Why do our cell’s power plants have their own DNA? 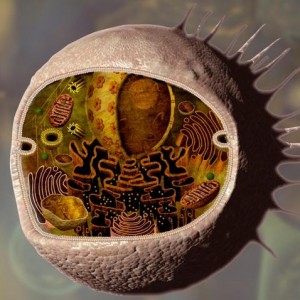 It’s one of the big mysteries of cell biology. Why do mitochondria—the oval-shaped structures that power our cells—have their own DNA, and why have they kept it when the cell itself has plenty of its own genetic material? A new study may have found an answer.

Scientists think that mitochondria were once independent single-celled organisms until, more than a billion years ago, they were swallowed by larger cells. Instead of being digested, they settled down and developed a mutually beneficial relationship developed with their hosts that eventually enabled the rise of more complex life, like today’s plants and animals.

Scientists have tossed around some ideas, but there haven’t been hard data to pick one over another.

So Iain Johnston, a biologist at the University of Birmingham in the United Kingdom, and biologist Ben Williams of the Whitehead Institute for Biomedical Research in Cambridge, Massachusetts, modeled the problem, mathematically comparing different hypotheses for the first time. They analyzed more than 2000 different mitochondrial genomes from animals, plants, fungi, and protists (like amoebas). They traced their evolutionary path, creating an algorithm that calculated the probabilities that different genes and combinations of genes would be lost at particular points in time.

“That’s one of the innovative aspects of this work, that it uses modeling which isn’t normally included in these sorts of studies,” says Keith Adams, a biologist at the University of British Columbia, Vancouver, in Canada who was not involved in the research.

Mitochondria make energy through a series of chemical reactions that pass electrons along a membrane. Key to this process is a series of protein complexes, large protein globs that embed in the internal membrane of the mitochondria. All of the mitochondria’s remaining genes help produce energy in some way. But the team found that a gene was more likely to stick around if it created a protein that was central to one of these complexes. Genes responsible for more peripheral energy-producing functions, meanwhile, were more likely to be outsourced to the nucleus, the group reports today inCell Systems.

It’s like responding to a fire, says John Allen, a biologist at University College London who was not involved in the study. If a single room in a large building goes up in flames, you don’t phone the building manager to ask permission to put it out. You grab a fire extinguisher and aim.

“I think that’s a very fundamental feedback mechanism,” Allen says. In his own research, he’s found evidence suggesting that producing certain mitochondrial proteins right where they’re needed helps the cell better regulate energy production. Other structures in our cells could also benefit from this type of local control. But mitochondria, with their history as stand-alone cells, are the only ones with their own command center.

Johnston and Williams’s model points out other factors that might be important as well. For instance, genes that encode mitochondrial proteins that are hydrophobic, or water-repelling, are more likely to be made in the mitochondria. If these proteins are manufactured elsewhere in the cell, they can sometimes get stuck in transit, so it can be more efficient to produce them in the mitochondria.

The chemical makeup of the genes themselves can also influence how likely they are to stick around. Genes that are chemically able to withstand the harsh conditions inside the mitochondria instead of being broken down might be more likely to persist.

Johnston thinks that the computer program he and Williams developed is good for more than just sifting through mitochondrial genomes. The algorithm can analyze any problem where individual traits are lost or gained over time, whether those are genes or symptoms of a disease. He hopes the model will be useful for future predictions along these lines, such as looking at pathways of disease progression.