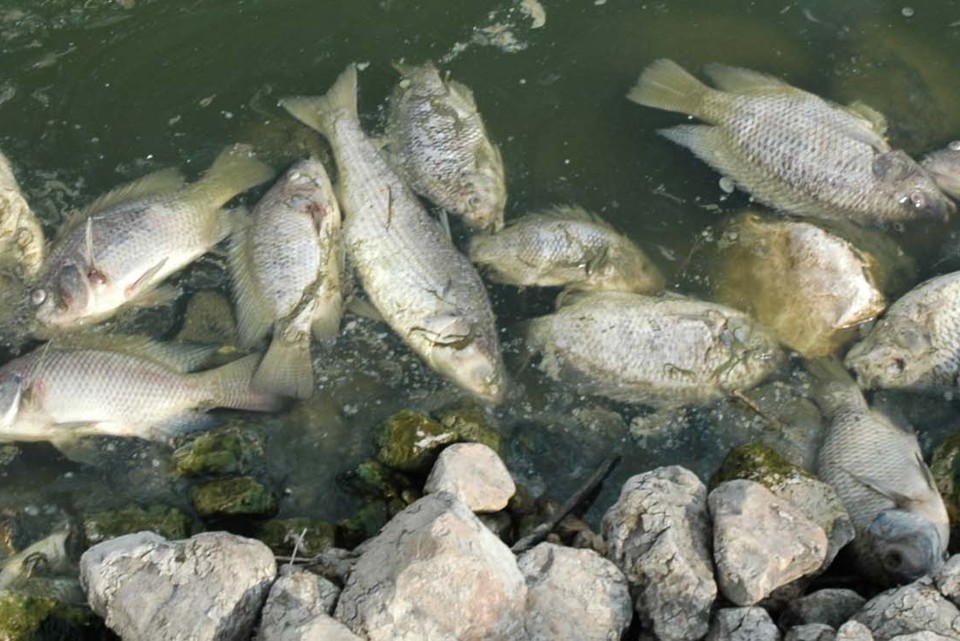 Zika and Ebola get all the headlines, but diseases that threaten livestock and crops could be even more dangerous to humanity.

ED YONG APR 5, 2016 SCIENCE
In 2005, fishermen pulled out 316 tons of tilapia, a tasty freshwater fish, from the Sea of Galilee in Israel. But four years later, the catch had fallen to just 8 tons. This wasn’t just another story about overfishing, though: Throughout the country, in the summer of 2009, farmed tilapia were also dying en masse.

“Farmers lost 20 to 30 percent of the fish in their ponds, and it was spreading from one pond to the next,” recalls Avi Eldar, a state-employed fish vet, who was called to investigate. The enigmatic die-offs didn’t fit any known parasite, toxin, bacterium, or virus. “We couldn’t diagnose the problem. We suspected that there was a new bug in town.”

Whatever the new infection was, it was only killing tilapia, without harming other fish. That’s a small consolation, though. Tilapia are thought to be the fish that fed multitudes in the New Testament, and they play the same role in the 21st century. Being large, tasty, quick to grow, and phenomenally easy to farm, they’re the core of a 7.5 billion dollar aquaculture industry that provides a critical source of protein for the developing world. Even America, the world’s leading tilapia importer, consumes 225,000 tons of the world’s 4.5 million ton stock.

The point is: “dying en masse” aren’t words you want to hear in relation to tilapia.

With help from Eran Bacharach from Tel Aviv University, Eldar eventually discovered that the tilapia’s woes were caused by a brand new virus, which he called tilapia lake virus, or TiLV. When his team injected it into healthy fish, they reproduced the same symptoms seen in the dying ones: sluggish behavior, reddened skin, and inflamed eyes and brain. And when these infected fish shared water with healthy ones, they passed on their disease, killing off more than 80 percent of their neighbors in a few days.

The mystery may be solved, but the threat isn’t over. Even before anyone knew it existed, TiLV had already spread around the world, triggering similar tilapia die-offs in Ecuador and Colombia. It’s also utterly unlike any virus that we know of, hinting at an entire world of related viruses that could potentially harm our food supplies.

We should be deeply concerned about such threats, but we’re not. By contrast, diseases that affect us directly, such as swine flu, Ebola, and Zika, saturate our headlines, prompt panicked talks of pandemics, and intense quests to develop vaccines and cures. But diseases don’t need to infect humans to screw us over: They can also take out the plants and animals that we eat.

“It’s a matter of food security,” says Ian Lipkin from Columbia University, one of the world’s foremost virus-hunters. “There’s no major investment in the infectious diseases of fish, and that’s an error. The losses can be substantial.”

Lipkin helped Bacharach and Eldar to sequence the genetic material of their new virus, and what he found was very strange. The virus’s genome was split into ten different clusters, none of which matched any known viruses. “There really wasn’t anything that we could pinpoint that told us what this was,” he says. One small segment of the new virus, if you squint at it just right, looks a little like part of influenzavirus C, which causes cold-like symptoms in humans—but the resemblance is remote. “It’s like forcing a square peg into a round hole,” says Lipkin.

“You’ve got everything, the tinder and the fuel. If the right agent finds its way to that milieu, you have a conflagration.”
Don’t be surprised if other similar pegs start turning up. “Now, as people begin looking at possible infectious diseases, they’ll now be able to access sequences that weren’t available when we began looking,” says Lipkin. I’ll predict that we’ll find many more diseases due to viruses that look more similar to TiLV than to previously known viruses.”

This has happened to him once before. In 1990, he showed that a bizarre horse illness called borna disease was the work of a virus that, like TiLV, was totally unlike any other. Scientists have since found many members of this family—the bornaviruses—and all because of that initial study. Find one new trunk of the viral family tree, and suddenly a whole spray of branches comes into focus.

In the meantime, Lipkin also suspects that he hasn’t heard the last of TiLV. His team has confirmed that the same virus kills tilapia in Ecuador and Colombia. It seems to hit livers in South America, and brains in the Middle East, but it’s definitely the same contagion in both continents. And if it’s in two, it’s probably in more. Birds might carry it from one place to another when they feed on infected fish. People might do the same thing as they carry starter cultures to new farms. Either way, “I think it’s a matter of time before the thing is ubiquitous,” Lipkin says. “Now, what to do about it?”

Isolating any infected animals is a decent short-term measure, but the future lies in vaccines. Lipkin thinks that he might be able to immunize the tilapia against the new virus by injecting them with a protein found on its surface, thereby training their immune systems to recognize the invader before it invades. “You can inject it into very young fish,” he says. “You won’t get them all, but the fish are cheap.” Vaccines aren’t, so Lipkin and Eldar are looking for industry partners to help them develop one.

Meanwhile, other threats loom. In 2010, Lipkin’s team identified a new reovirus that was killing farmed salmon in Norway and the U.K. Schmallenburg virus, a midge-borne disease that causes stillbirths and deformities in livestock, was identified in 2011 and has spread through western Europe. Older foes, such as avian influenza and Newcastle disease virus which infect poultry, are showing up as new strains and variants.

“These agents don’t simply appear,” says James Casey from Cornell University. “They are already there and we make the conditions that cultivate them for emergence. Start by crowding the species. This results in stress. Lastly, add greed, market conditions, and ineffective biosecurity. It’s like a broken record.” On top of that, we have animals and crops that are bred for specific characteristics, so any incipient infection can find huge numbers of equally susceptible hosts. “You’ve got everything, the tinder and the fuel,” says Lipkin. “If the right agent finds its way to that milieu, you have a conflagration.”

The same applies to plants. Potato blight, a fungal disease, destroyed Ireland’s economy in the 1840s, sending a wave of migrants to North America and creating lasting political tensions with England. Today, a new, virulent, and pesticide-resistant strain called Blue-13 is spreading through Europe. As I wrote for Aeon in 2013, “around 90 percent of the world’s calories come from just 15 types of crops, most of which are highly inbred monocultures planted over sprawling acreage. These monocultures skew the evolutionary arms race in favor of pathogens, and create the conditions wherein old threats can easily evolve into new virulent strains.”

If we aren’t careful, we could court disaster, in part because these plagues of agriculture are less attention-grabbing than those of our own bodies. And yet, they affect the very things that fuel, feed, and form our bodies. Pestilence and famine are apocalyptic horsemen that ride together.

Source: The Scary Thing About a Virus That Kills Farmed Fish – The Atlantic