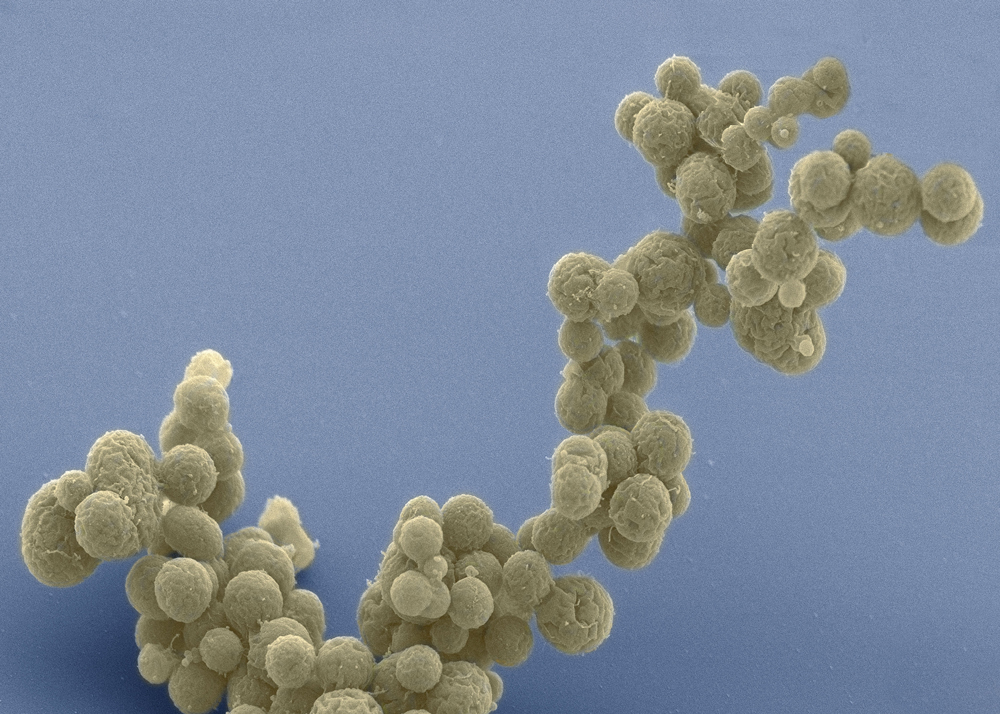 Scientists strip a microbe genome to the bare essentials needed for life. And these simple cells reveal more questions than answers.

A team of biologists has synthesized the smallest genome that can encode for a living, replicating cell, but the discovery reveals how much we still don’t know about the fundamental building blocks of life.

Geneticist J. Craig Venter and his colleagues at the Venter Institute started with the genome of Mycoplasma mycoides, which is a species of bacteria with the smallest genome of any self-replicating cell scientists know of so far. They inserted a foreign genetic sequence called a transposon into one gene at a time, which stopped the gene from working so the researchers could watch what happened. If the cell kept going without the disrupted gene, the researchers labelled it as non-essential and cut it out of the genome.

After four years of working their way through M. mycoides’ genome, the researchers had whittled it down to the bare minimum: 473 genes, about half of the original bacterial genome. They call the result JCVI-Syn3.0, and they published their results Thursday in the journal Science.

Blank Spots on the Map

Still, 31 percent of the minimal genome remains a mystery.

Venter and his colleagues say that some of the unknown genes occupy similar places in the bacterial genome as genes that encode universal proteins found in other organisms, but scientists aren’t sure what role those proteins play in the complex processes of life.

For scientists, it was a reminder of how much we still don’t understand about fundamental biology.

“Knowing that we’re missing a third of our fundamental knowledge, I think, is a very key finding, even if there’s no other uses for this organism,” says Venter. “I think we’re showing how complex life is even in the simplest of organisms, if we don’t understand the functions of a third of those genes.”

That’s an important and humbling lesson, according to the researchers.

You can see that we only understand two-thirds of the most fundamental cell that we can compile right now, we’re probably at about the 1 percent level in understanding the human genome, which is why I’ve argued it’s vastly premature to talk about editing the human genome until we know a whole lot more,” Venter cautioned.

The gap also explains why this minimal genome was actually larger than many scientists had predicted it would be. Since 1995, scientists had estimated that the smallest genome that could encode life capable of growing and replicating would have between 256 and 300 or so genes.

Minimal is a Relative Term

Venter and his team emphasize that Syn3.0 is a minimal cell, not the minimal cell. They say there will be many minimal genomes for organisms with different kinds of metabolism living in different environments. A microbe whose metabolism depends on methane, for example, will have a different minimal genome than one that relies on photosynthesis.

“One important finding is that every genome is context-specific, so it totally depends on the chemicals in the environment that it has available to it,” says Venter.

For example, the bacterium Mycoplasma genitalium lives on two kinds of sugar: fructose and glucose. It can metabolize either one, but the cell uses a different chemical transporter to take in each sugar. The genes that encode the fructose transporter may be expendable in an environment full of tasty glucose, but change the environment, and that fructose transporter is suddenly essential to survival.

Syn3.0, for example, probably can’t survive outside the lab in its current form, according to other scientists who reviewed the paper.

“JCVI-syn3.0 displayed substantial defects in growth and morphology that suggest it is extremely unlikely that such a cell would survive outside of the laboratory,” says Samuel Deutsch, Head of DNA synthesis and Assembly at the DOE Joint Genome Institute.“Hence any potential risks associated with JCVI-syn3.0 are minimal.”

This is a Starting Point for Science / So what can a minimal genome do?

The researchers hope it will be a teaching and research tool for learning about the early evolution of life. Venter says the Institute plans to make the genome available to other researchers soon, and it’s considering a contest, which would award a prize for the most important new evolutionary step added to Syn3.0 every year.

They also have their eye on industrial applications, such as building cells with genomes designed to produce drugs, biofuels, and other chemical products. Currently, biologists who want to engineer bacteria to produce these useful chemicals have to add a single gene to an existing bacteria, then disrupt other genes to redirect the cell’s effort to producing the desired chemical.

It’s a lengthy process of trial and error to create an organism that can produce enough of the right chemicals for the job.

Of course, that kind of genetic engineering will be a long-term challenge, according to others in the field.

“It’s not as if this new minimal genome will automatically lead to either fundamental insights or industrial applications immediately,” says Sriram Kosuri, assistant professor of chemistry and biochemistry at UCLA. “That said, they’ve created a self-replicating biological organism that might be a better starting point for such scientific and engineering goals than continuing to study natural systems.”

Meanwhile, the team is focused on trying to figure out what each of the mystery genes actually do, and how it all comes together.

Others in the field are excited by the chance to fill in blank spots in the map of genetic knowledge.

“One of the great findings but also the great caveats of this work is that it allowed them to discover how much we don’t know, even about the core sections of the genome,” says Adam Arkin, director of the Berkeley Synthetic Biology Institute at the University of California, Berkeley. “That is exciting, scientifically. This work may be a great platform for applications, but it also presents a moment for reflection about how we’re going to approach a better understanding of life.”