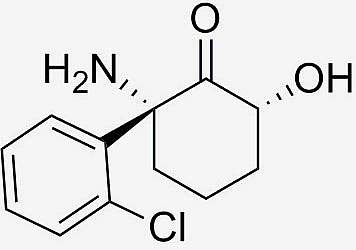 A chemical byproduct, or metabolite, created as the body breaks down ketamine likely holds the secret to its rapid antidepressant action, National Institutes of Health (NIH) scientists and grantees have discovered.  This metabolite singularly reversed depression-like behaviors in mice without triggering any of the anesthetic, dissociative, or addictive side effects associated with ketamine.

“This discovery fundamentally changes our understanding of how this rapid antidepressant mechanism works and holds promise for development of more robust and safer treatments,” said Carlos Zarate, M.D. of the NIH’s National Institute of Mental Health (NIMH), a study co-author and a pioneer of research using ketamine to treat depression. “By using a team approach, researchers were able to reverse-engineer ketamine’s workings from the clinic to the lab to pinpoint what makes it so unique.”

NIMH grantee Todd Gould, M.D.(link is external), of the University of Maryland School of Medicine, in collaboration with Zarate and other colleagues, report on their findings May 4, 2016 in the journal Nature. The team also included researchers at the NIH’s National Center for Advancing Translational Sciences (NCATS) and National Institute on Aging (NIA), and the University of North Carolina.

“Now that we know that ketamine’s antidepressant actions in mice are due to a metabolite, not ketamine itself, the next steps are to confirm that it works similarly in humans, and determine if it can lead to improved therapeutics for patients,” explained Gould.

Clinical trials by Zarate and others have shown that ketamine can lift depression in hours, or even minutes— much faster than the most commonly used antidepressant medications now available, which often require weeks to take effect. Further, the antidepressant effects of a single dose can last for a week or longer. However, despite legitimate medical uses, ketamine also has dissociative, euphoric, and addictive properties, making it a potential drug of abuse and limiting its usefulness as a depression medication.

In hopes of finding leads to a more practical treatment, the research team sought to pinpoint the exact mechanism by which ketamine relieves depression. Ketamine belongs to a class of drugs that block cellular receptors for glutamate, the brain’s chief excitatory chemical messenger. Until now, the prevailing view was that ketamine produced its antidepressant effects by blocking N-methyl-D-aspartic acid (NMDA) glutamate receptors.

A team of NIH intramural scientists and grantees traced ketamine’s rapid antidepressant effects to activation of AMPA receptors by a byproduct of its chemical breakdown called (2R,6R)-HNK (above) – a different mechanism than had been previously assumed.NCATS

However, human trials of other NMDA-receptor blockers failed to produce ketamine’s robust and sustained antidepressant effects. So the team explored the effects of ketamine on antidepressant-responsive behaviors in mice. Ketamine harbors two chemical forms that are mirror images of each other, denoted (S)- and (R)-ketamine. The investigators found that while (S)-ketamine is more potent at blocking NMDA receptors, it is less effective in reducing depression-like behaviors than the (R) form.

The team then looked at the effects of the metabolites created as the body breaks down (S)- and (R)-ketamine. It was known that ketamine’s antidepressant effects are greater in female mice. NIA researchers Irving Wainer, Ph.D., and Ruin Moaddel, Ph.D. identified a key metabolite (2S,6S;2R,6R)-HNK (hydroxynorketamine) and showed that it is pharmacologically active. The team then discovered that levels of this metabolite were three times higher in female mice, hinting that it might be responsible for the sex difference in the antidepressant-like effect. To find out, the researchers chemically blocked the metabolism of ketamine. This prevented formation of the metabolite, which blocked the drug’s antidepressant-like effects.

Ketamine also has effects in mice that mimic its dissociative, euphoric effects in humans and underlie its abuse and addictive potential; however, these effects were not observed with (2R,6R)-HNK. (2R,6R)-HNK did not cause the changes in physical activity, sensory processing, and coordination in mice that occur with ketamine. In an experimental situation where mice were able to self-administer medication, they did so with ketamine but not the (2R,6R)-HNK metabolite, indicating that (2R, 6R)-HNK is not addictive.

“Unraveling the mechanism mediating ketamine’s antidepressant activity is an important step in the process of drug development,” said Richard J. Hodes, M.D., NIA director. “New approaches are critical for the treatment of depression, especially for older adults and for patients who do not respond to current medications.”

The researchers are now following up on their discovery with safety and toxicity studies of the metabolite as part of a drug development plan in advance of a NIMH clinical trial in humans for the treatment of depression.

About the National Institute of Mental Health (NIMH): The mission of the NIMH is to transform the understanding and treatment of mental illnesses through basic and clinical research, paving the way for prevention, recovery and cure. For more information, visit http://www.nimh.nih.gov.

The National Center for Advancing Translational Sciences is a distinctly different entity in the research ecosystem. Rather than targeting a particular disease or fundamental science, NCATS focuses on what is common across diseases and the translational process. The Center emphasizes innovation and deliverables, relying on the power of data and new technologies to develop, demonstrate and disseminate improvements in translational science that bring about tangible improvements in human health. For more information, visit https://ncats.nih.gov.

About the National Institute on Aging: The NIA leads the federal government effort conducting and supporting research on aging and the health and well-being of older people. The Institute’s broad scientific program seeks to understand the nature of aging and to extend the healthy, active years of life. For more information on research, aging, and health, go to www.nia.nih.gov.

About the National Institutes of Health (NIH): NIH, the nation’s medical research agency, includes 27 Institutes and Centers and is a component of the U.S. Department of Health and Human Services. NIH is the primary federal agency conducting and supporting basic, clinical, and translational medical research, and is investigating the causes, treatments, and cures for both common and rare diseases. For more information about NIH and its programs, visit www.nih.gov.

Source: Ketamine lifts depression via a byproduct of its metabolism | National Institutes of Health (NIH)