Home THE UNIVERSE It’s possible that there is a “mirror universe” where time moves backwards, say scientists – Quartz 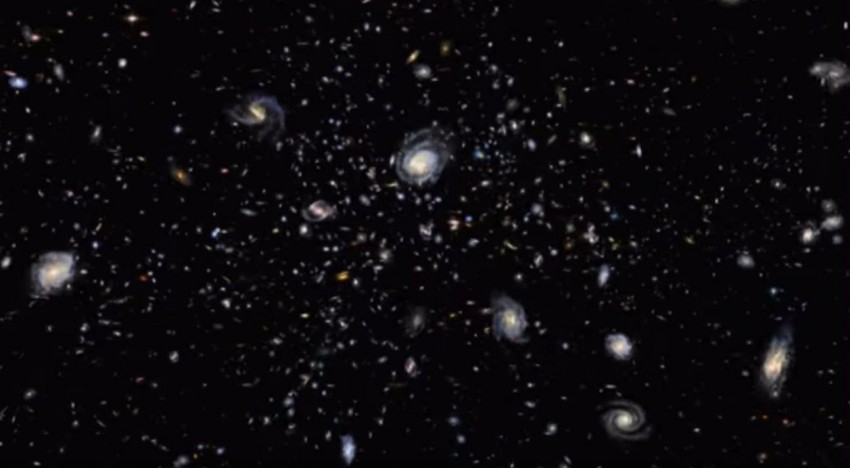 Although we experience time in one direction—we all get older, we have records of the past but not the future—there’s nothing in the laws of physics that insists time must move forward.

In trying to solve the puzzle of why time moves in a certain direction, many physicists have settled on entropy, the level of molecular disorder in a system, which continually increases. But two separate groups of prominent physicists are working on models that examine the initial conditions that might have created the arrow of time, and both seem to show time moving in two different directions.
When the Big Bang created our universe, these physicists believe it also created an inverse mirror universe where time moves in the opposite direction. From our perspective, time in the parallel universe moves backward. But anyone in the parallel universe would perceive our universe’s time as moving backward.

The first model, published a little over a year ago in Physical Review Letters, argues that that one of the basic implications of Newton’s theory of gravity creates the conditions for time to move in a certain direction. Julian Barbour from the University of Oxford, Tim Koslowski from the University of New Brunswick and Flavio Mercati from the Perimeter Institute for Theoretical Physics, argue that for any confined system of particles—a self-contained universe such as our own, for example—gravity will create a point when the distance between particles is minimal.
When the particles then expand outwards, they do so in two different temporal directions. Barbour and his colleagues created a simplified 1,000 particle point model of the universe showing this dual expansion, with gravity creating structure in both directions.
Mercati explains that such systems converge and then expand by necessity, according to the Second Law of thermodynamics (one of the most basic implications of Newtown’s laws.) And that the growing entropy determines our individual experience of the arrow of time.
The physicists call the moment before expansion the “Janus point,” after the two-headed Roman god. “Time is not something that pre-exists,” Barbour tells Quartz. “The direction and flow of time we have to deduce from what’s happening in the universe. When we look at it that way, it’s natural to say that time begins at that central point and flows away in opposite directions.”
Barbour compares the Janus point to the moment where a river splits in two and flows in opposite directions. “It’s the simplest thing,” he says. “You start at that central Janus point where the motion is chaotic –that’s like the Greek notion of primordial chaos—but then in both directions you get this structure forming. If the theory is right, then there’s another universe on the other side of the big bang in which the direction of experience of time is opposite to ours.”
But though time could flow in different directions, that doesn’t mean we could ever experience the reverse.
“We’re on one side of the Janus point,” Mercati tells Quartz. “On one side you get your arrow of time and can never experience the other one. It’s in your past.”
The two-headed arrow of time

While their theory is far from universally accepted, it did generate excitement and attention in the field. And now, New Scientist reports, two other physicists—Sean Carroll from California Institute of Technology in Pasadena and Alan Guth from Massachusetts Institute of Technology—have created a similar particle model that shows time moving in two different directions, in two parallel universes, from the Big Bang. Their model is currently unpublished, but the physicists say that it is even more simplified than Barbour’s as it does not rely on gravity or particles being in a confined system. Instead, it is based on the concept of entropy alone, and no other preconditions, and so it applies to particles in infinite space rather than only self-contained systems.

Based on their model, half the particles expand outwards, increasing entropy. The other half converge and become highly compact, decreasing in entropy, until they pass through the system’s central point and create entropy in the opposite direction. Imagine, as a crude analogy, a pile of balls on a trampoline: Half of the balls rebound upward, while the other half converge in the middle, and break through the trampoline to create a messy pile on the other side. And so the big bang leads to entropy going in two different directions, in two different universes.
“We call it the two-headed arrow of time,” Guth tells the New Scientist. “Because the laws of physics are invariant, we see exactly the same thing in the other direction.”
The theory is far from tied up. As the New Scientist points out, there are initial stages in the model where the direction of entropy growth—and so the arrow of time—is not clearly defined, and so difficult to account for.
Plus, Barbour says, the work is based on classical physics. Once questions of quantum physics are introduced, “all bets are still off.” He adds:
“Instead of having two streams emanating from a river, it could be more like a fountain where you have lots of pairs of springs. Or just a whole host of springs flowing out of a fountain in different directions.”
Still, if classical physics alone is distorting our preconceptions of time, then it suggests there’s certainly more to time than our linear, one-directional experience.

Source: It’s possible that there is a “mirror universe” where time moves backwards, say scientists – Quartz